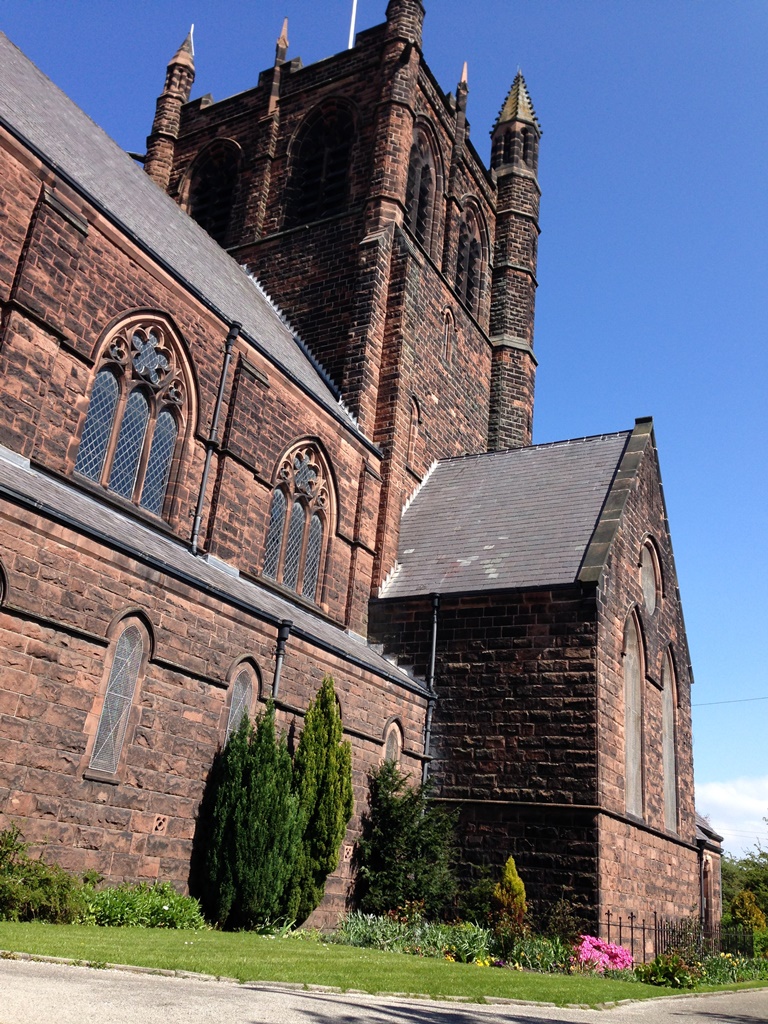 The village of Oxton was originally part of the Parish of Woodchurch. However, as the village grew in size in the mid-nineteenth century, the villagers began to abandon the difficult walk to their parish church and instead worshipped in an old barn nearby. Then, in 1851, the villagers pulled down the barn and built a small ‘chapel-of-ease’ on the same site, dedicating the new chapel to St Saviour.

In 1857, the owner of the land, the 19th Earl of Shrewsbury, and the Vicar of Woodchurch, the Revd Joshua King, took the necessary legal steps to allow Oxton to become its own ecclesiastical parish, separate from Woodchurch. (The Earl conveyed the land on which our chapel-of-ease stood to the Vicar, and he in turn endowed the chapel with a tithe.) The Privy Council was then able to create a new parish for Oxton, and St Saviour’s Chapel became our first Parish Church.

In time, the congregation outgrew their modest building, and it too was pulled down to make way for the much larger and very fine parish church building which we have today. Catherine King – a descendent of the Revd Joshua King – laid the foundation stone in 1889, and building work on the main structure was completed in just two years. The first service in the new building was held in 1891, and the tower was completed the following year.

Our Parish Church contains a number of fine furnishings and architectural features. To find out more about these, click on the tabs below. 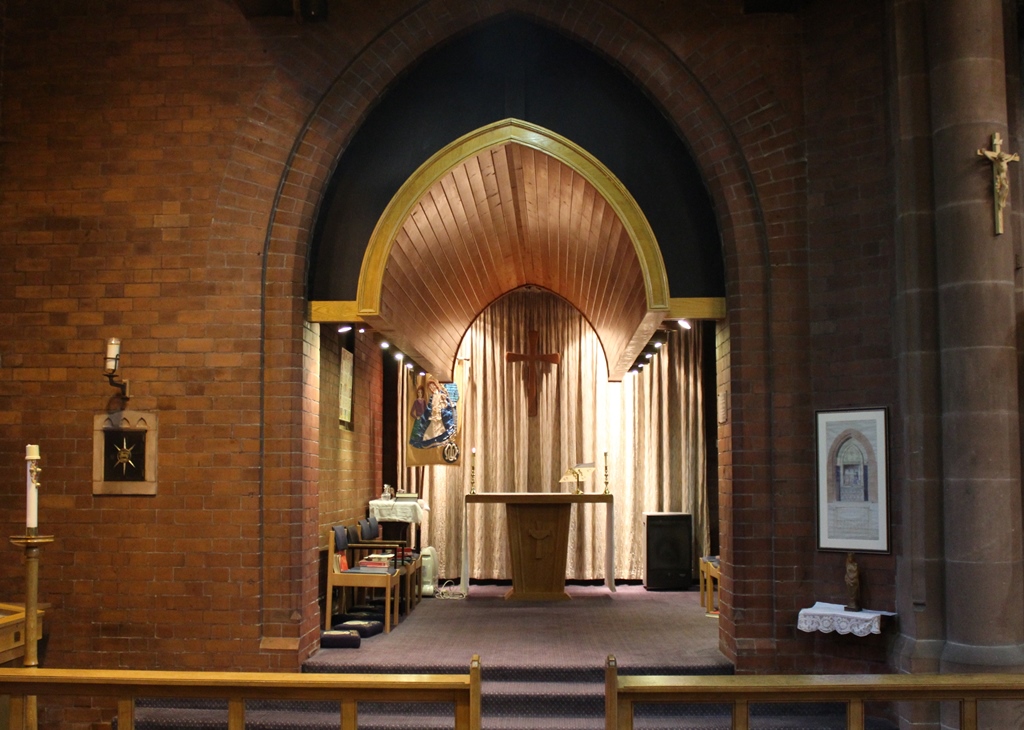 The Lady Chapel has a special significance in our parish church since it is here that weekday Eucharists are celebrated, and also since it is the place where the Reserved Sacrament and blessed oils are kept in a secure cabinet known as an aumbry. On the north wall of the Chapel, you can see the Book of Remembrance, given to the church by Doreen Lloyd.

‘Lady Chapel’ is a traditional term for a chapel dedicated to the Blessed Virgin Mary, the mother of Jesus. For this reason, our parish’s Mothers’ Union branch makes the Chapel a special place for prayer. The Chapel contains our parish’s Mothers’ Union banner, which was designed, worked and given by the late Mabel Lane, and also a number of hassocks worked by members of the MU.

The Lady Chapel was extensively refurbished in the 1980s. The cross behind the altar was crafted and donated by the late Margaret Sutton, and the altar was given in memory of Connie Glyn Jones. 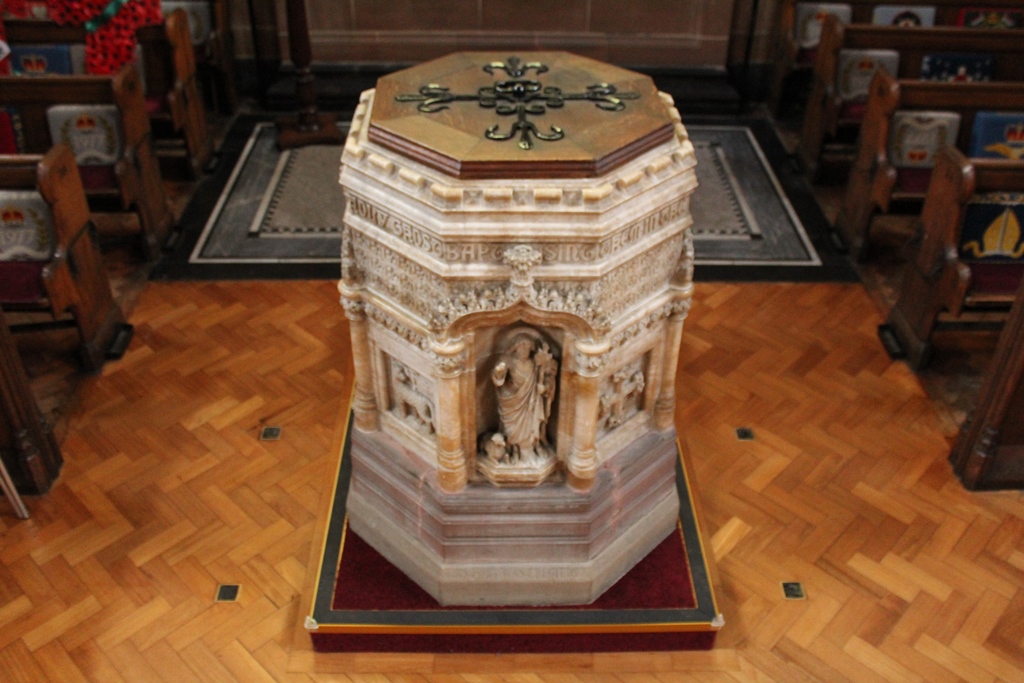 Our font  is placed near the entrance of the church in order to remind us that baptism begins our membership of the Church.

Our font is eight-sided. This reminds us of the seven days of creation, followed by “the eighth day” (the day after the Sabbath) on which Jesus rose from the dead. So our eight-sided font symbolises the new creation which Christ’s resurrection ushers in, and into which we enter at our Baptism.

There are four figures in the niches of our font, and four emblems in the panels. The niches show Christ as the Good Shepherd, and then three of the evangelists (St Mark, St Luke, and St John) with their usual symbols (a lion, an ox, and an eagle, respectively). The panels between the figures contain a depiction of Christ as the Paschal Lamb, a depiction of the Holy Spirit as a dove descending, three fishes on a wavy background to represent water, and a cross.

Around the base of the font, written in Roman capitals, is an inscription saying that it was erected by Annie Eliza Krietmair, wife of Francis T.B. Kreitmair of Noctorum, in 1891. The font is made of alabaster. 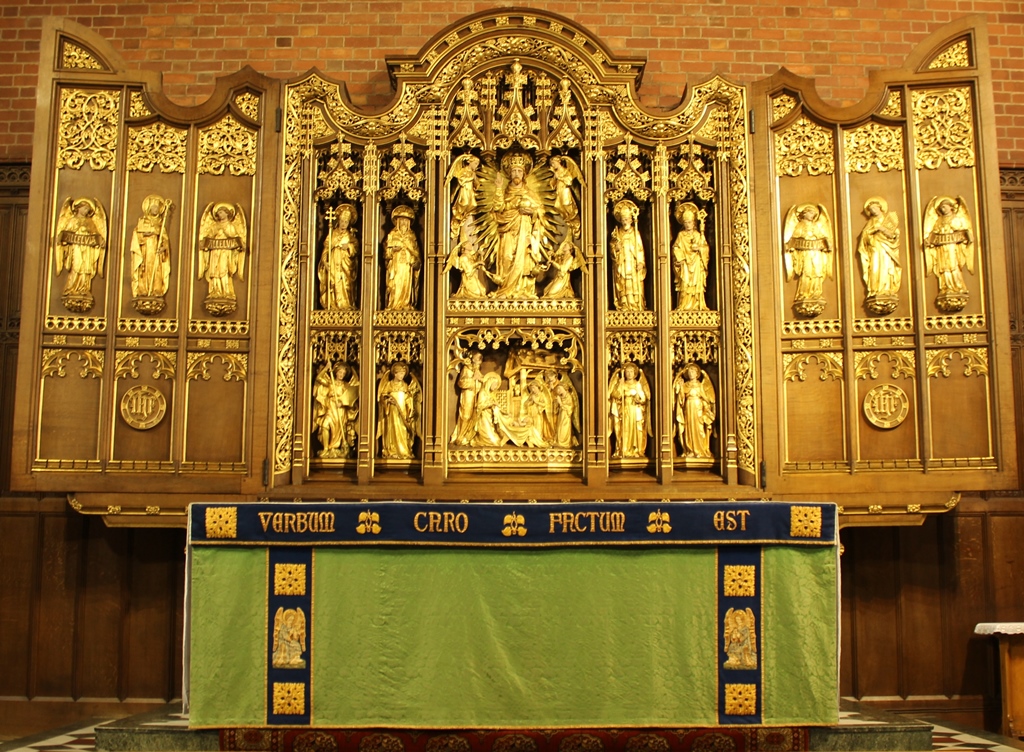 The guilded oak screen, or reredos, situated behind our high altar was given to the church in memory of Joseph Beausire, a member of a once well-known Oxton family. It was designed by the highly regarded British Gothic architect, George Frederick Bodley.

The reredos has the triptych form: 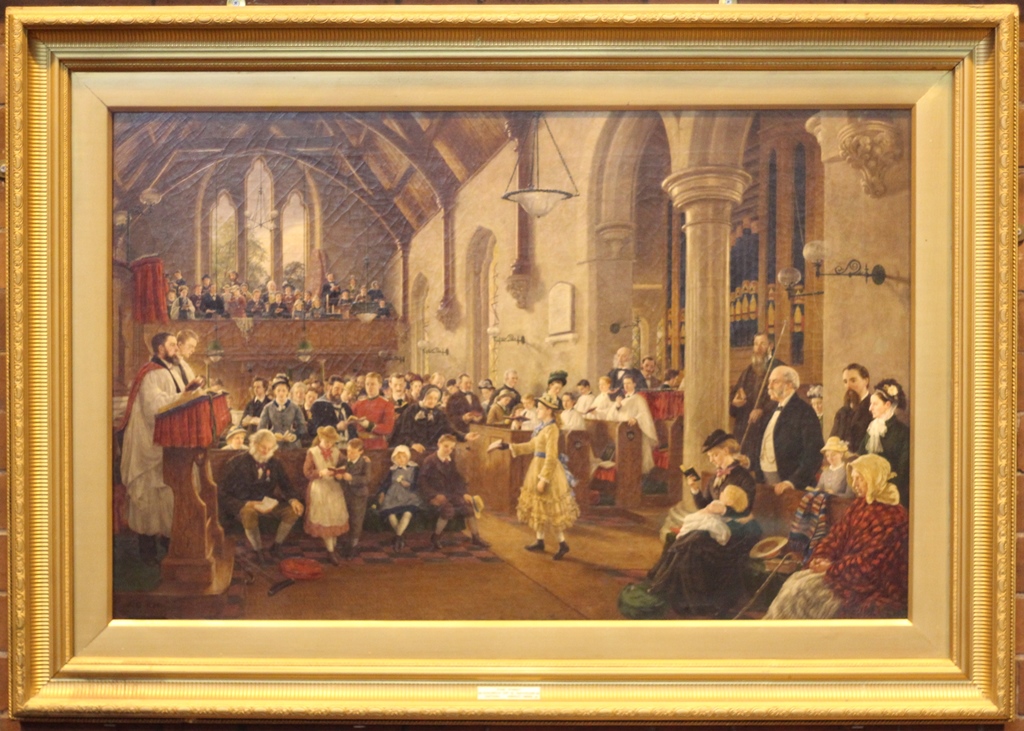 An oil painting of the first St Saviour’s Church in Oxton (built 1851) can be seen on the north wall of our Lady Chapel. It depicts a Sunday Service.

The painting was given in 1866 by Catherine King, who went on to lay the foundation stone of our present Parish Church in 1889. 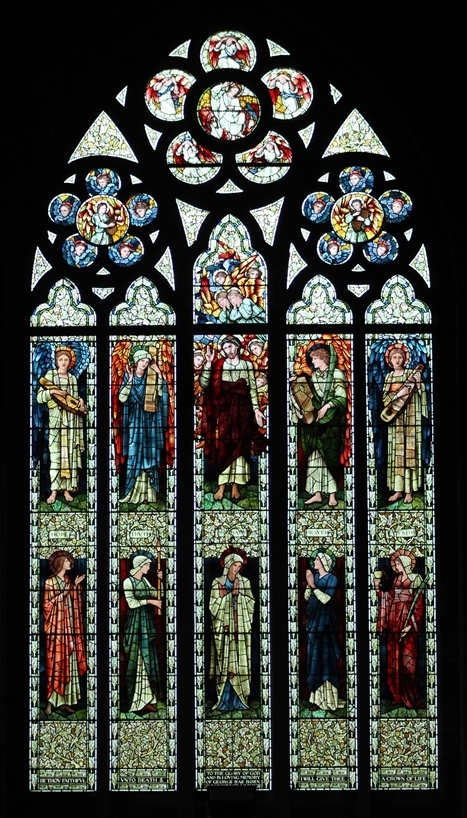 The west window in our parish church is a beautiful example of a stained-glass design by Sir Edward Burne-Jones, executed by William Morris. It was given as a memorial to George Rae (1817-1902), a Birkenhead banker and patron of the Pre-Raphaelites.

The top rose of the window shows Christ in heaven, surrounded by angels. Two lower roses contain angels with dulcimers, ringed by seraph heads. The five main lights exhibit two rows of figures. Christ in the centre is flanked by two angels with lutes in the outer pair, while Deborah and an angel with lutes are found in the inner pair. Beneath are five female figures: Hope; Truth; the Virgin Mary; Prayer; and Faith.

The window was removed for safety during the Second World War, so the glass is original. The only exception to this is one small portion which was lost or damaged during the war, and had to be replaced. It is thought this is the ‘Truth’ section in the lower part of the window. 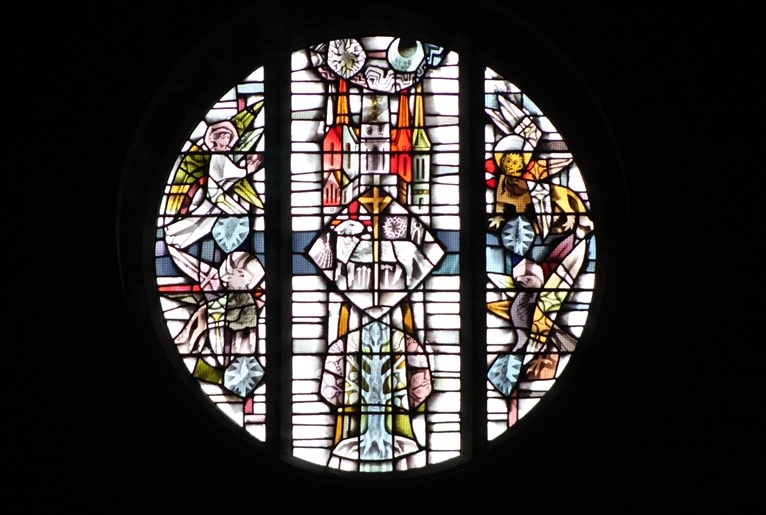 Our east window was designed and executed by Professor Leonard Evetts of Newcastle University, and dedicated in 1974. It replaces an original and much larger window which was destroyed by an incendiary bomb in the Second World War. It seems appropriate, then, that the lower section of the new window portrays the tree spoken of in Revelation 22.2 – “… the tree of life with its twelve kinds of fruit, producing its fruit each month; and the leaves of the tree are for the healing of the nations.”

Looking further up in the east window, you can see images of the New Jerusalem, as this is depicted in chapters 21 and 22 of the Book of Revelation. The Holy City can be seen with its walls and spires and sun and moon. Jesus is depicted as the Lamb of God, holding the resurrection standard so that we can all see and follow him. Near to the Lamb are the crown of thorns, the hammer, pincers and nails. The translucent glass of the central panel is cut (unusually) horizontally and has shades of blues and greens to represent the river of life (Revelation 22.1), flowing from the throne of God through the city’s street.

Finally, we can find features in the east window which connect it to other art in our church. The Ascended Christ appears in the window, as in the triptych beneath it. The four traditional figures representing the evangelists (human/angel, lion, ox, and eagle – see Revelation 4.7) appear, too, as they do on our font and our lectern. 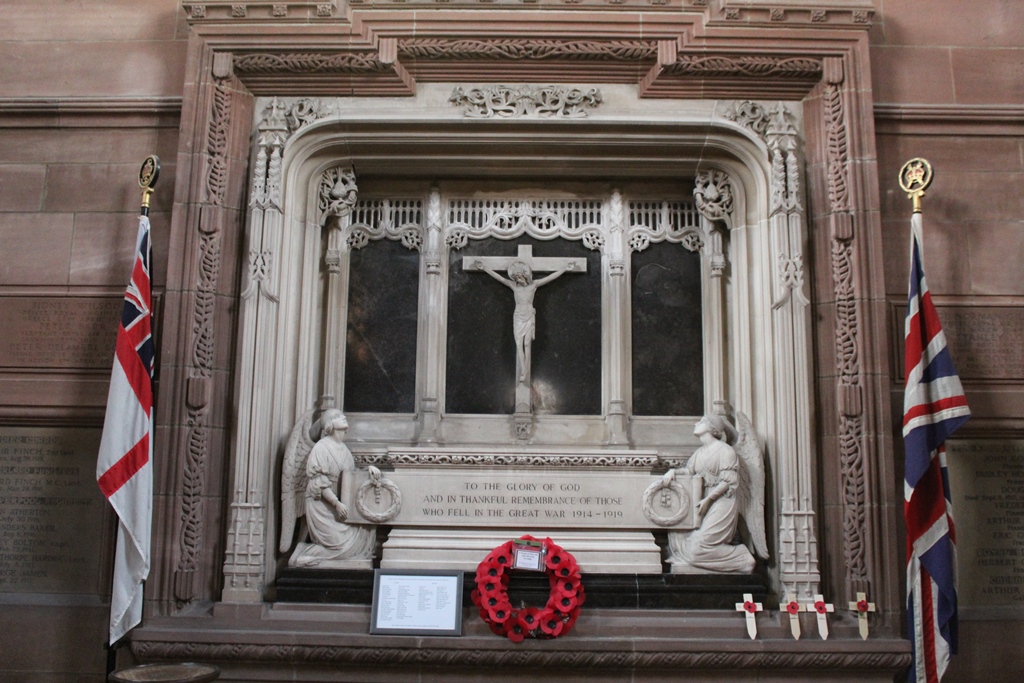 Below the west window in our Parish Church is a memorial to our parishioners who died in the two world wars of the twentieth century. It was designed by English architect, Sir Giles Gilbert Scott.

The central portion of the memorial is of white marble, with a black marble background framed in red sandstone. The crucifixion in the centre has two angels below. The names of the fallen carved in red sandstone, are placed alphabetically, irrespective of rank.

The memorial is a focal point at our annual Remembrance Sunday service.

In addition, we are privileged to house a repatriated grave marker from one of the battlefields of the Great War. The cross, which is mounted on the north wall of our church, is dedicated to 2nd Lieutenant A.S. Balfour, 3rd Batt. Res Bde RFA RFC, who was killed in action on 13 January 1918, aged 23 years. To see the cross, and to find out more about it, click here.